It has been one year and a half for EXO to come to Hong Kong again to hold their solo concert here. The show starts sharply from 7pm by a VCR, after that EXO performs their hit songs, such as “MAMA” (Remix ver.), “Monster” (Remix ver.) and “Wolf” (remix ver.). With the stage effect,  EXO brings a powerful opening performance to all EXO fans in Hong Kong yesterday night.

After that, each  members have a greeting and introduction time to fans. EXO then moved to extend stage to have a closer communication with fans, they sang “White Noise”, “Thunder”  “Play Boy” and “Artificial  Love”.  EXO dances with a cane and fans screamed loudly by the sexy dance moves of EXO members during the songs.

EXO did not only brings powerful performance to fans, but also acoustic music. All members sat on the stairs right in front of the main stage, while member Lay and Chanyeol played guitar along with other members’ singing.

Apart from it, EXO also acts like fans boyfriend to perform. While playing the VCR, the video cam is taking  1st person angle, which makes fans felt like EXO is taking their hands, eating and playing together with them.  Fans scream louder after watching it and after the VCR ends, EXO sang “Heaven” and “Girlfriend”.  To show support to EXO, all fans hold a slogan writing “Not Friend, but boyfriend” while EXO is singing the song “Girlfriend’’. 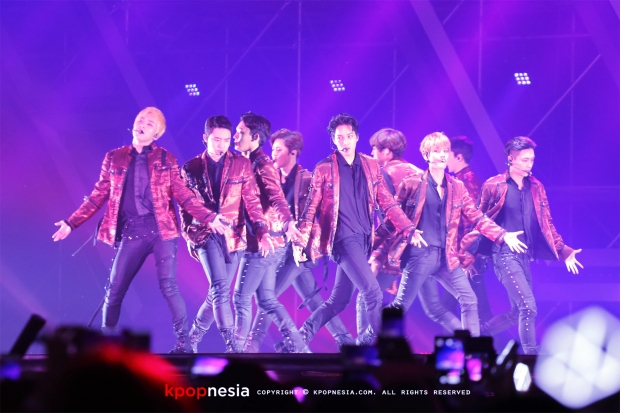 In Ment, as EXO has just finished perform in water, Chanyeol said he need to change his underwear as it has all got wet. Leader Suho then said “you have change once during the performance so far already!” which makes fans laugh. But then other members asked why Suho and D.O. did not get wet, D.O said its because the water evaded him and Suho said its because he  didn’t bring another underwear for it. Baekhyun heard it and said “Then you can perform without wearing underwear!” Fans screams and laugh loudly  which makes Suho joked they need to be aware of talking this kind of issue as their fans are youngsters only.

Members also talked about their favorite things recently, such as Chanyeol addicted to skiing, and Sehun like playing YOYO. After the Ment,  EXO performs “Full Moon”, “Drop that” and “keep on dancing”.  EXO ended the concert by singing “Angel” and Suho as a leader has a ending speech to fans before the ending song played, which they hope that they can be in Hong Kong again soon, and they feel happy to perform here as it is their first concert in 2017, also it has been a long time for them to hold solo concert here.

The concert lasted for around 3 hours and ended in happiness.

KPOPNESIA would like to thanks  Media Asia (寰亞娛樂) for the opportunity to cover this event!